Need help? Start a web chat with one of our pharmacists or our customer service representatives now!

Get Your Copy Today

Tell your friend about us and earn $25 for each new customer you refer to us.

You’ve probably read about the advantages of using an online pharmacy, but you’d still...

READ MORE.
Online Pharmacies Save You Money, See How

Search by Drug or Product Name

For some people, the world can feel like a terrifying place. Around every corner lie stress, worry, and fear. It’s difficult to cope with the challenges that life throws at them, and it’s difficult to know which stressors in life will result in a triggering of the “fight or flight” response.

This stress response, which is typically characterized by a rapid heart rate, sweating and a general feeli 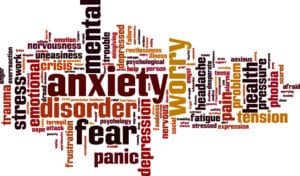 ng of fear, is necessary to human survival. Usually, this response is triggered by events that are or could be dangerous, allowing us to make fast decisions, move quickly, or perform unusual feats of strength.

For people with a diagnosis of anxiety, this stress response is overactive, causing them to feel fear in situations that most would consider non-threatening or even throughout the day with no clear trigger. In time, an anxiety disorder can significantly decrease a person’s quality of life and make it difficult to perform daily activities of living.

In addition to generalized anxiety, other disorders that fall under the heading of anxiety disorders include:

Anxiety disorder is often treated with a combination of medication and mental health counseling.

Some anxiety disorders are believed to be genetic in nature while others, such as PTSD, are triggered by events – although the person in question may already have a physical predisposition toward anxiety. About 40 percent of people with generalized anxiety disorder have close family members with the disorder.

The symptoms of anxiety disorders can vary depending on the specific disorder, but the typical symptoms of generalized anxiety include:

Another risk factor for developing anxiety that may be within the patient’s control is substance abuse. Drug and alcohol abuse both increase the risk for anxiety disorder, and caffeine and nicotine have also been linked to the disorder.

Anxiety disorders are usually diagnosed by qualified mental health professionals such as psychiatrists. The patient is also likely to receive a complete medical examination, including laboratory testing, to rule out an underlying condition that could mimic some of the symptoms of anxiety disorder such as a problem with the thyroid.

The provider will also conduct a thorough evaluation using specialized questionnaires to learn more about the symptoms, how long the patient has been experiencing them, and what may be triggering them.

Anxiety is typically treated using a combination of psychotherapy with a qualified mental health practitioner and medication. Psychotherapy is also known by the names psychological counseling and “talk therapy.” The goal of this therapy is to look at the underlying causes of anxiety, work through those stressors and triggers, and learn how to make behavioral changes.

Antidepressants used to treat this disorder by rebalancing the neurotransmitters include buspirone, paroxetine, sertraline, and venlafaxine. These medications must be taken daily and may take two weeks or more to build up in the system. Patients are usually started at a lower dose and build up to a therapeutic dose.

Medications known as benzodiazepines effectively provide quick, temporary relief of symptoms to help a patient get through a particularly stressful time. Some medications in this class include lorazepam, diazepam and alprazolam. These medications often have noticeable side effects that include drowsiness and impairment of muscle coordination, balance and memory. Patients taking these medications should not drive. Additionally, benzodiazepines can be habit-forming.

While anxiety disorder can be a lifetime condition, with counseling and medication, most patients see a quick improvement of their symptoms in less than a month. It’s important to continue to take medications exactly as prescribed and not change a dose without consulting the provider since these medications work to rebalance chemicals in the brain, and without the medication, the neurotransmitters may once again become unbalanced.

In time, a person with anxiety disorder may be able to discontinue medication and truly recover from their condition. It will be important to work carefully with a mental health professional who can determine whether the patient has made a full recovery.

Untreated anxiety disorder can have severe ramifications. The condition may cause physical disorders including teeth grinding, headaches, insomnia and digestive distress.

Anxiety can also lead to other mental health concerns including depression, phobias and substance abuse. In its most severe cases, anxiety disorder may make it difficult for a patient to maintain relationships or hold a job, and it may even eventually lead to death by suicide.

Because it’s impossible to predict what could cause a person to develop an anxiety disorder, there is no specific way to prevent the disorder. If the patient is aware that a family history of anxiety exists, they should be vigilant and tell a doctor about any concerning symptoms right away.

Some steps that patients can take to prevent or lessen the severity of anxiety or panic attacks include: